On Friday I set up my studio space for the assessment after Christmas.  It looks rather minimal but I'm hoping the work will speak for itself - here are a few photographs:- 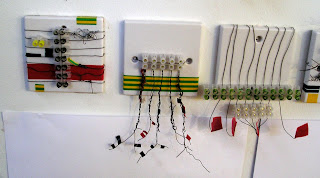 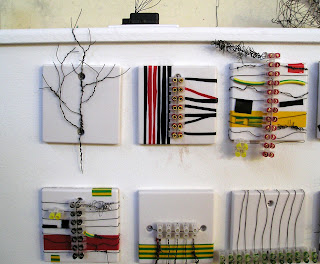 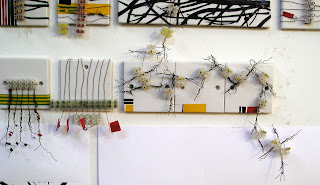 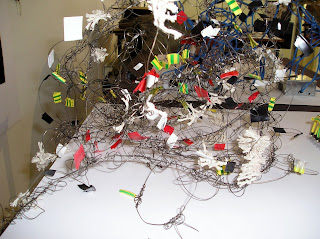 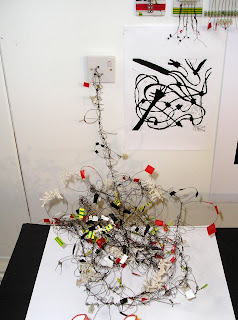 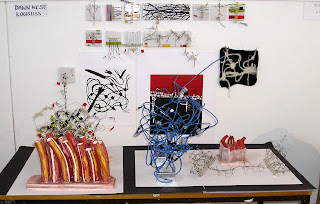 I've a couple more sockets to make and of course the sugar dummies/insulators and that's about it.  Over the holidays I'll be working on my sketchbook and notebook and eating chocolates and staying close to the fire.

Fingers crossed for January!
Posted by Dawn West at 1:13 PM No comments:

Remember my nice yellow ceramic piece?  It fired brown.  Brown seems to be my default setting for ceramics.  And the colour wasn't even fixed, it rubbed off on anything it touched.

So I rubbed off all the excess oxide and then tried to improve the appearance with yellow acrylic paint applied using fingers.  The best that can be said is it looks industrial but it's a far cry from the sculpural, polished look I was hoping for:- 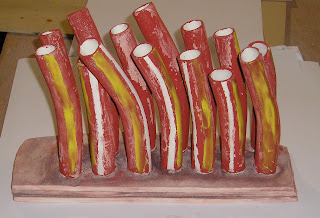 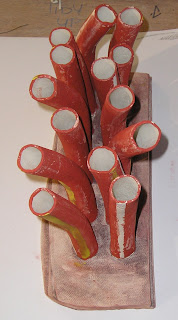 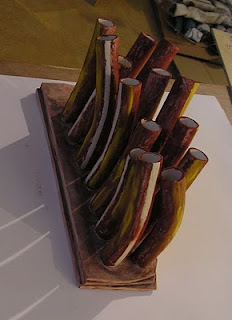 Here's the second woodblock print I made.  The inspiration was a Photoshopped print from the photograph I took of the wire and socket.  If all that sounds confusing, here's the sequence:- 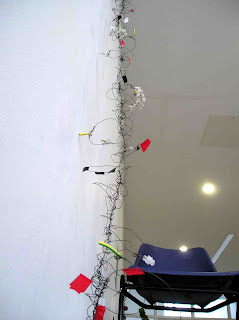 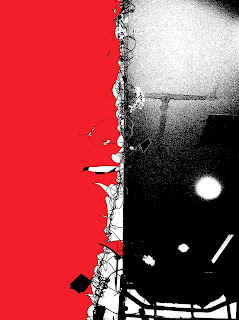 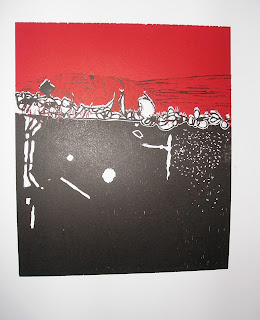 Whilst I like the extra detail in the photograph, the woodblock looks much more alive, energetic and human somehow.  I love how woodblocks show every cut and nick that was made whereas photographs are much colder and impersonal.
Posted by Dawn West at 3:10 PM No comments:

A while ago I took some photos of silhouettes of bare tree branches which reminded me of the way power lines also cut across the sky.  This week I decided to take this idea a bit further and made some 'drawings' of these on plastic blanking plates using insulating tape and wire.  I used some of the original photographs for inspiration and plan to incorporate them into the other sockets I made using wire and tape. 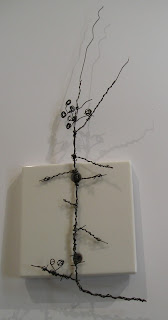 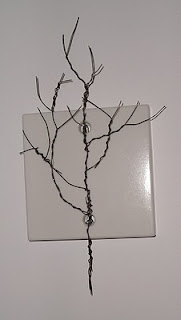 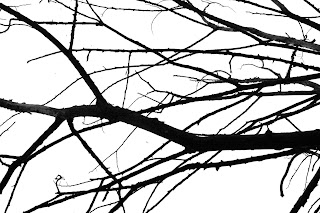 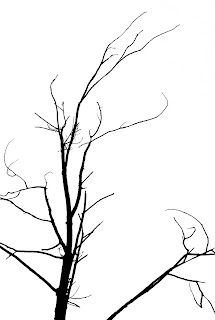 I like the way that the wire and tape and sockets, although being utilitarian and industrial in design combine to make somthing quite delicate and natural-looking.
Posted by Dawn West at 2:52 PM No comments:

I made a mould of a ceramic insulator from a telegraph pole that I 'found' recently.  It's the old-fashioned type and reminds me of a baby's dummy and so I decided to cast the insulator in sugar like the big sugar dummies that I used to buy on day trips to Blackpool.  This was the idea:- 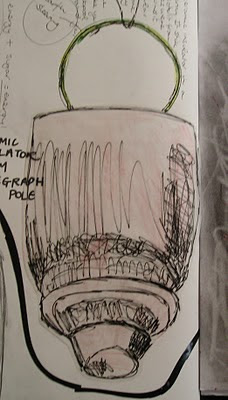 ﻿I was thinking as well of electricity and sugar both being energy sources.
Unfortunately after casting it looks rather phallic which gives a whole different nuance to this piece:- 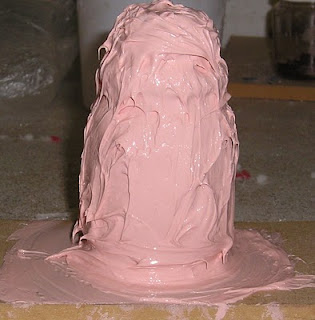 Maybe it's the pink silicone I used for the mould ...
Anyway I'll be casting this weekend at home so fingers crossed.  Note to self - do NOT use pink food colouring for dummies.
Posted by Dawn West at 2:38 PM No comments:

I seemed to bump into just the right people this week so the woodblock is halfway there and one of my ceramic pieces, based on the connectors and earth wire sleeving, is glazed and I've everything crossed that it will come out yellow and not brown.  Here are the photos from the making and glazing of the ceramic pieces:- 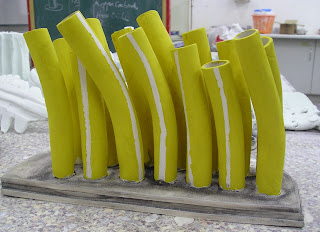 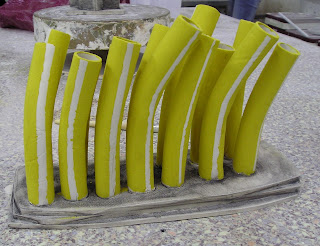 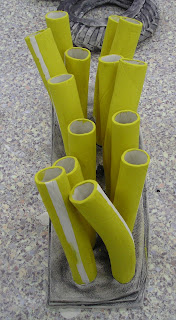 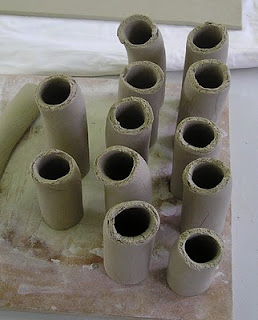 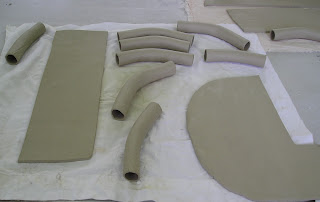 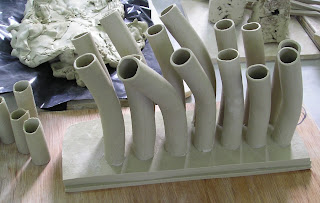 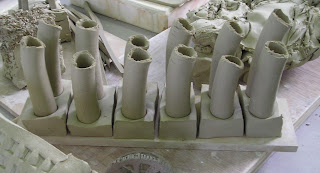 This was the inspiration:- 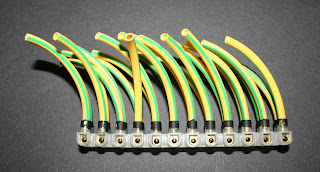 I also decided to try and make a woodblock print of this photo:- I needed to cut two woodblocks - the first is finished and I'm working on the second one this weekend whilst snowed in at home (hopefully). 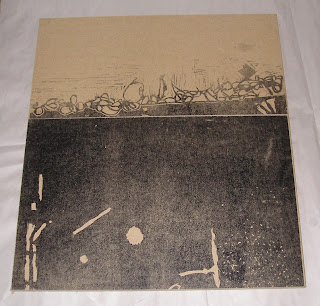 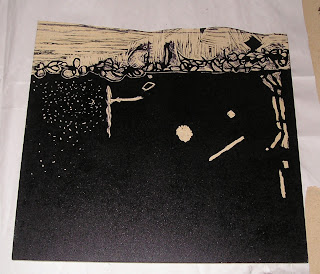 I'm not as keen on the image as I was a week ago but maybe it will look better when the red goes on.  And anyway I like cutting woodblocks for some strange reason.﻿
Posted by Dawn West at 12:59 PM No comments:

What's the worst thing that can happen when you've finished your essay except for a bit of 'fettling' (as they say in Yorkshire) and you haven't backed it up on the memory stick?
You switch on the PC and the fan is whirring and the hard drive is making a beep, beep, beep, beep noise.  The screen is dead and no amount of unplugging and re-plugging and jiggling connections makes any difference.
This can be expressed visually as:-

Interestingly when looking as the word hysteria, which most closely described my state of mind at that point, here are several other images I found:-

And the hysteria over swine flu ... which just goes to show that it's not worth getting worked up over anything really.

I know this is nothing to do with my project but I feel better now.

Normal service will be resumed with the next post.
Posted by Dawn West at 11:07 AM No comments: